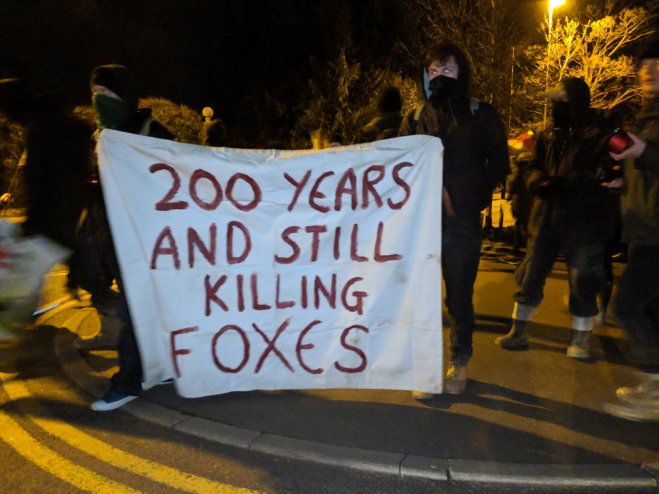 So after a day spent out sabbing. Followed by a quick trip to a pub for some hot chips and pints.

We headed to a demo of a Hunt Ball. Now in my head, I was pretty pumped for this. As over the years, I’ve kinda perfected my art of loudness. Plus, after seeing the expertise of the sabs in the field. I was eager to see how they went on with a protest.

I was not disappointed in the slightest.

We arrived at the Crown Plaza hotel that was hosting the ball and we were greeted by supporters on our side with signs and whistles. People of all ages in attendance.

There was a minor scuffle to reach the side entrance as it was clear the hunt was entering from a side door.

Introducing the hunt to the megaphone. All I can say regarding this was. LOUD. The megaphone was used to its full capabilities. With it coming with a siren function just for added noise.

Now. South Coast Hunt Saboteurs have a sab, that is, how to say. Better than the Huntsman at horn blowing…by a longshot. So add in the sound of the hunter’s horn. The attendees already inside rushed to the windows with a mix of concern and bewilderment. Who was this imposter!

I stood and watched as the sound of the horn rang out over the hotel carpark and into the surrounding buildings. What a sound. Especially when produced by a sab!

Although the hired security did try to push us around. They soon realised sabs are not the drunken punters they are used to, so they backed off. This left us free to ensure all arriving ball attendees were greeted with bright lights in their faces, choruses of “hunt scum kill for fun” and other hard-hitting reminders of their cruel, illegal and outdated traditions. Some attendees arrived wearing fur. Yes. Fur. For fuck’s sake. These inbred cunts really do believe they’re entitled to everything. Including the skin off one’s back. Bastards!

At one point what us Aussies call a riot van pulled up, and I thought we were all in for it. However, two lonely policemen got out and joined their comrades alongside the hired security. One shortly officer did try to bully the sabs around. This failed, and with the megaphone doing its work. The chants and horn also at work, things were going really well.

So I decided to take a turn on the megaphone. Boy was this fun. I don’t know how the hunt felt about an abusive Aussie accent calling them out to come hunt kangaroos on horseback and see how long they’d last for or reminding the police force about their hunting act they fail time and time again to enforce. Add in I swear like a sailor, even more so when excited. It wasn’t long before the local police got anxious and attempted to arrest me. A quick response from the sabs ensured the police weren’t going far. After a promise to tone the language down they let me go.

“Yeah SABS!!” The unity displayed was inspiring. I knew I had their back. In my eyes I was an import, I have everything to prove. They do not. The admiration I already had for my UK comrades was simply multiplied.

With my return to the sabs, Do You Really Want to Hurt Me by Culture Club was played down the megaphone. To a cheer and then all focus was back on the hunt and their arriving supporters.

What a demo it was. Everyone got back safe and The Hunt Ball was properly interrupted. 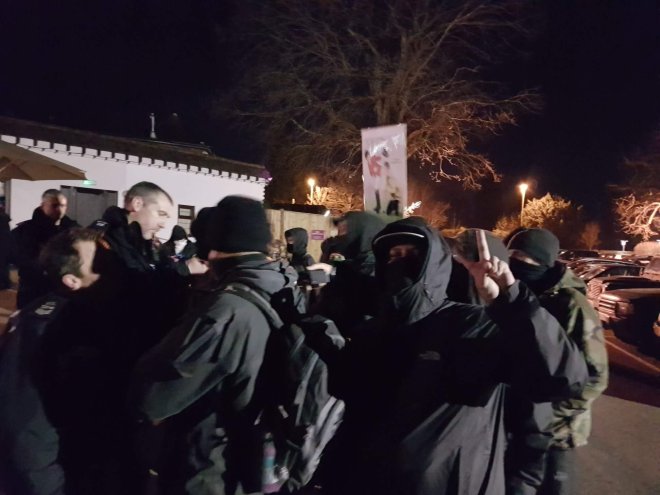 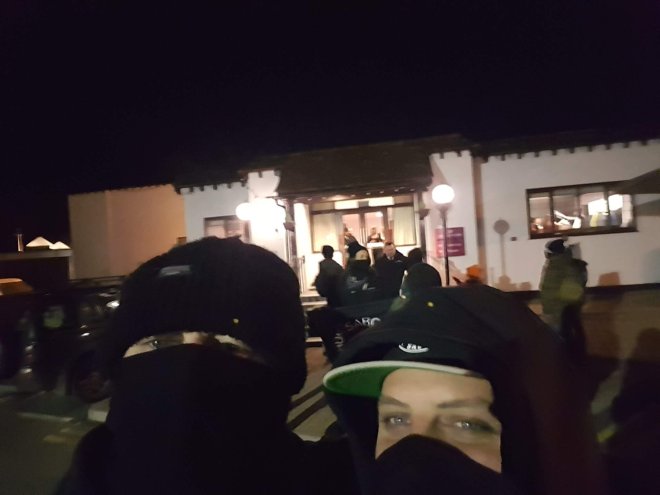 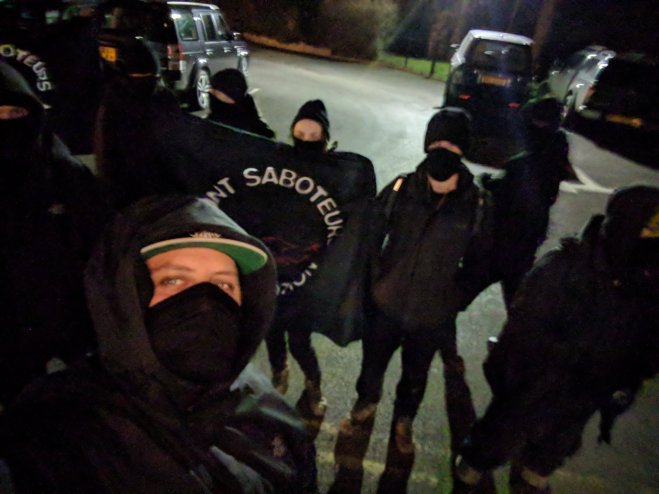 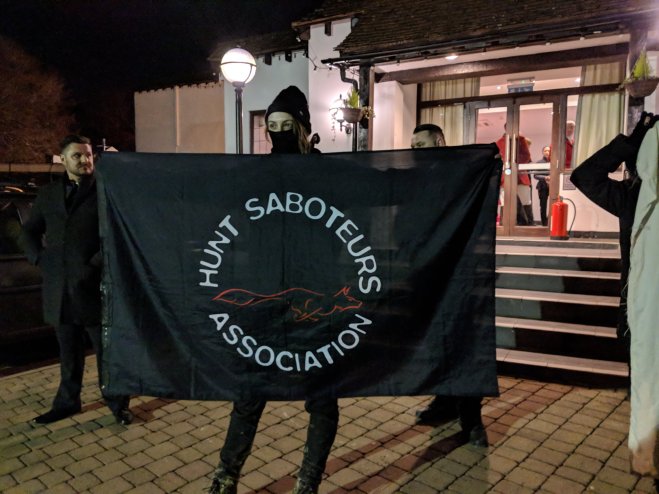 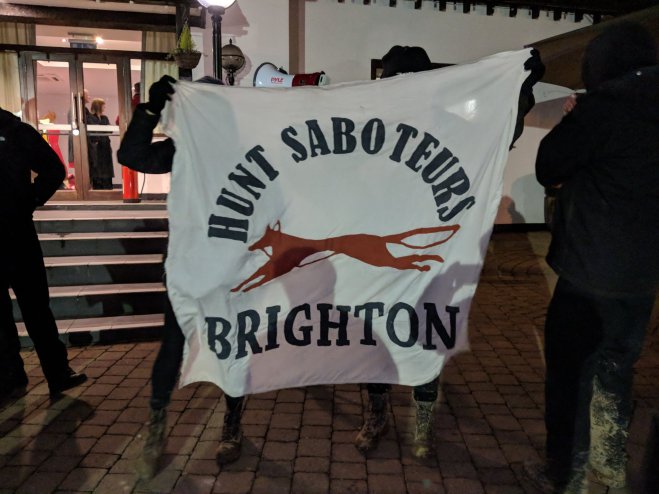 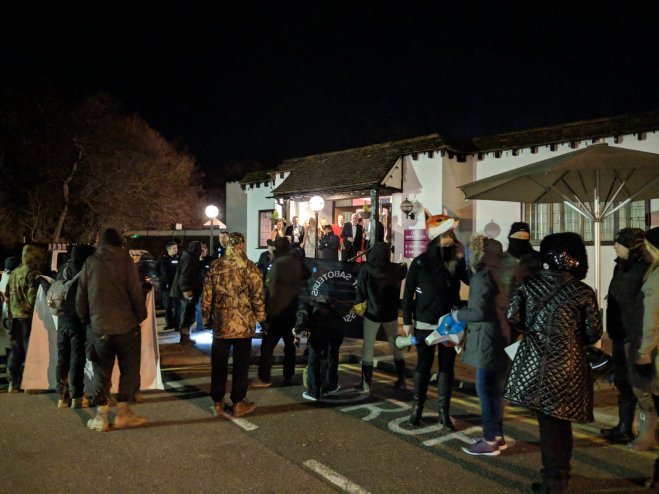